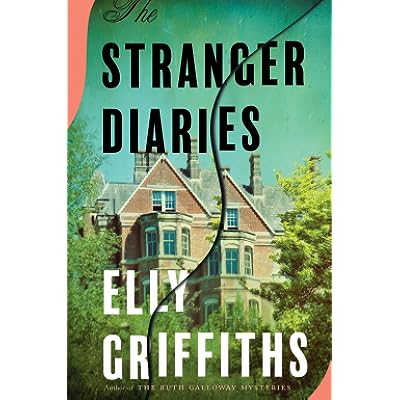 The Main Characters:
CLARE CASSIDY -- a divorced high school English teacher who's writing a biography about the Gothic writer R.M. Holland (or at least trying to)
GEORGIA -- Clare's 15-year-old daughter who's into creative writing and Wicca (which her mother doesn't know)
HERBERT -- their fluffy white dog that's a cross between a cairn terrier and a poodle
DS HARBINDER KAUR -- the lead detective on the case who still lives with her parents and who also attended Talgarth High when she was a teenager

The Premise:  This well-written mystery begins with the murder of Ella Elphick, an English teacher at Talgarth High and Clare Cassidy's friend. The police think the murderer is someone Clare knows, but she can't imagine anyone wanting to kill Ella. Then she finds a note in her diary written in the same handwriting as the note the police found by Ella's body. How did the killer get hold of her diary? And is she next on the killer's list? Or is he killing for her?

My Thoughts:  Griffiths writes such engaging and compelling characters! The narrative rotates between three POVs: Clare's, Harbinder's, and Georgia's. And I liked them all. None of them are perfect, but I got caught up in each of their stories. Griffiths also weaves the fictional R.M. Holland's Gothic tale, The Stranger, throughout the narrative, adding another layer to this intriguing mystery. While I didn't guess the killer, I had fun trying to figure it out. I had even more fun reading this book with Melody. This is our fifth buddy read this year. Be sure to check out her review, and her questions for me that follow.

1. The author has written a suspenseful mystery with a Gothic tone in this story (and a story within as well.) What do you think of this "book within a book" concept? Generally, do you think it's a good addition or is it a diversion to the overall story?
I usually like it when an author uses this 'story within a story' device. It's always interesting to get an added layer and a secondary story to go along with the main one. But it doesn't always add to the mystery. In this book, for example, I think the overall story would have been the same with or without including those parts from Holland's short story, The Stranger, along the way. But even though the short story didn't tie in too tightly with the main mystery, I still thought it was fun to read. I just wish I could have read Holland's other short story, The Ravening Beast, too.

2. To put this in a fun and hypothetical way, what do you think Harbinder and Gary had seen back when they were both students back at Talgarth High? Do you think it's the ghost of Alice Avery or is it their imagination, given the atmosphere of the old building?
Hmm... Harbinder doesn't strike me as the kind of person to be influenced by atmosphere or rumors of ghosts (even though she loved to read horror stories as a teen). So I'm going to say that they really did see the ghost of Alive Avery. The fact that neither she nor Gary ever told anyone about what they saw afterward also makes me think that they really did see something creepy and supernatural that night at the school that they both wanted to forget. I loved that practical, no-nonsense Harbinder had this unexplainable and eerie moment as a teen; it made me like her even more.

Thanks, Melody, for another fun buddy read!