Brought to you by the letter... 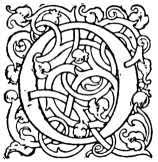 Last week, Simon at Stuck in a Book hosted this fun meme...you get assigned a random letter of the alphabet and then you tell your favorite book, author, song, film, and object beginning with that letter. I got the letter 'O', and while I wouldn't have chosen this particular letter, I did manage to come up with the required list of favorites. (Some more easily than others.)

For a favorite book, I scanned my bookshelves for any and all titles that start with O. I found a couple: O Pioneers! by Willa Cather and The Odd Women by George Gissing. Either would have been a good choice, but then I spotted my favorite Kay Hooper novel which, happily, starts with just the right letter:

Choosing an author was even easier because I could only think of one:
WHITNEY OTTO.

There were several options for an 'O' song, like Ingrid Michaelson's Overboard or Sam Phillips' One Day Late, but in the end I had to go with Joan Osborne's One of Us.


Coming up with an 'O' movie actually didn't take me as long as I thought it would. I had this DVD sitting on my shelf...a quietly suspenseful ghost story starring Nicole Kidman that I happen to love:

So that left the object, which was surprisingly hard. I mean, ornaments seemed too vague, and I don't really like opera glasses, octagons, or obtuse angles. So I settled on Origami Yoda instead.

Awesome, is he not?