P.G. Wodehouse is one of those authors I've been meaning to read for years. So many people seem to love his books I always figured I'd probably like them, too, but for some reason I kept putting it off. Bookish procrastination is one of my many faults. But this month, I finally checked out a couple from the library and actually read them. I'm just sorry it took me so long. Because they're as fun and charming and humorous as everyone says.

Lisa @ TBR313, who's a great fan of Wodehouse, recommended two of her favorites:  Leave it to Psmith and The Code of the Woosters.  Sadly, neither was readily available at my library, although I hope to read both soon. Instead, I decided to start with Enter Jeeves which contains the first eight Jeeves short stories, and the funny and delightful comedy of manners, The Adventures of Sally.

What can I say?  I loved them both. You can now count me a fan of P.G. Wodehouse, too. Here's a taste from each book so you can see what I mean.

From Enter Jeeves:
Jeeves--my man, you know--is really a most extraordinary chap. So capable. Honestly, I shouldn't know what to do without him...I rely on him at every turn. I'm a bit short of brain myself:  the old bean would appear to have been constructed more for ornament than for use, don't you know; but give me five minutes to talk the thing over with Jeeves and I'm game to advise any one about anything.

And from The Adventures of Sally:


Sally looked contentedly down the long table. She felt happy at last. Everybody was talking and laughing now, and her party, rallying after an uncertain start, was plainly the success she had hoped it would be....At her end of the table the conversation had turned once more to the great vital topic of Sally's legacy and what she ought to do with it. The next best thing to having money of one's own, is to dictate the spending of somebody else's, and Sally's guests were finding a good deal of satisfaction in arranging a Budget for her. 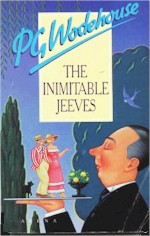