According to the movie Leap Year, there's an Irish tradition that says a woman can propose to a man on Leap Day. And that's just what Anna (the character played by Amy Adams) does ... or tries to do ... in this light-hearted romantic comedy. This movie isn't perfect, but I still like it. Matthew Goode (whose character ferries Anna from Dingle to Dublin) is very good looking; and Amy Adams is typically funny. But what I love best is the gorgeous Irish scenery. This movie always makes me long to spend a month (or two!) exploring Ireland's beautiful countryside. 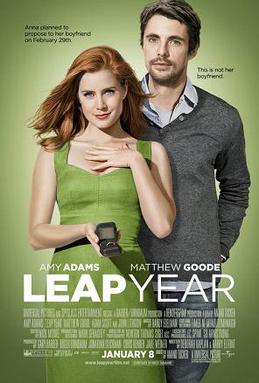 Elizabeth Smart and Malala Yousafzai.
On the surface, these two girls could not be more different.
One was born in Salt Lake City, Utah, the other in the Swat Valley in Pakistan.
One is blond, the other brunette. One is Mormon, the other Muslim.
What they have in common is that both experienced something horrible and shocking as teen-agers, and they both survived. More importantly, they have each shown an amazing spirit of hope, grace, courage, and unfailing optimism. I admire both of them and I think each of their memoirs are worth reading. Here are a couple of my favorite excerpts from their books:

My Story by Elizabeth Smart:

"When faced with pain and evil, we have to make a choice. We can choose to be taken by the evil. Or we can try to embrace the good. ... Life is a journey for us all. We all face trials. We all have ups and downs. All of us are human. But we are also the masters of our fate. We are the ones who decide how we are going to react to life."

I Am Malala by Malala Yousafzai:

"I thank Allah for the hardworking doctors, for my recovery and for sending us to this world where we may struggle for our survival. Some people choose good ways and some choose bad ways. One person's bullet hit me. It swelled my brain, stole my hearing and cut the nerve of my left face in the space of a second. And after that one second there were millions of people praying for my life ... I know God stopped me from going to the grave. It feels like this life is a second life. People prayed to God to spare me, and I was spared for a reason--to use my life for helping people."

A Duty to the Dead by Charles Todd
(This is an awesome read! Thanks for the recommendation, Danielle!)

Recently checked out of the library:
The Wolves of Andover by Kathleen Kent
Bound by Sally Gunning
Dead Letter Day by Eileen Rendahl
Say You're Sorry by Michael Robotham
Apollo's Outcasts by Allen Steele

Against a Brightening Sky by Jaime Lee Moyer

Today is Dorothy Canfield Fisher's 137th birthday. Her classic children's novel, Understood Betsy, which was first published in 1916, is also celebrating a birthday. It's 100th! How cool is that? Even better, Understood Betsy takes place in Vermont, which, for me, checks off another New England state in Lory's Reading New England Challenge. And that's three!

When this novel begins, Elizabeth Ann is a thin, little girl of nine living with her Aunt Harriet and Aunt Francis who coddle and fuss over her. She is a fearful, dull child prone to tears. But then Aunt Harriet gets sick and Elizabeth Ann is sent to live with her Vermont relatives, Uncle Henry, Aunt Abigail, and Cousin Ann, at Putney Farm. They dub her Betsy and teach her to do things like drive a team of horses and make butter, as well as to act and think for herself. Betsy blossoms under the care of her Vermont relatives. She gets a kitten, gains some independence, makes new friends, has some adventures, and soon discovers that while "Not a thing had happened the way she had planned...it seemed to her she had never been so happy in her life."

One hundred years after it was first written, Understood Betsy has a definite old-fashioned feel to it, with chapter headings like "Elizabeth Ann Fails in an Examination" and "Betsy Has a Birthday". Fisher is generous with her authorial comments throughout the novel, and Betsy learns many life lessons while at Putney Farm like, "A dim notion was growing in her mind that the fact that she had never done a thing was no proof that she couldn't." Wholesome would be a good word to describe this book, but I think that's why I like it. Understood Betsy transports you back to a more innocent time where life moves at a slower pace, hard work is valued, children don't grow up too fast, and happiness is found within the walls of a humble but loving home. It reminded me of both Pollyanna and Little Women, which isn't bad company to be in.

On "bookshelf anthropology".  In her book The Little Bookstore of Big Stone Gap, Wendy Welch talks about getting to know someone through the books they own. She writes, "Bookshelf anthropology can be fascinating; how many times have you scanned a friend or associate's bookcases to discover similar--or disquietingly dissimilar--tastes?" I know when I spot books that I've read, especially when they're books that I love, on someone else's bookshelves, I feel an instant kinship with them. What they choose to read tells me more about who they are. Which makes me wonder what the books on my shelves say about me. It's kind of fun to think about. So, what do your bookshelves say about you?

On reading from the R shelf.   In Reading the Alphabet, I'm ready to move on to the Rs, but as I peruse the shelves at my library I am feeling less than inspired. There are a lot of authors to choose from...but I'm not finding any that I really want to read. Got any suggestions? Who's your favorite author whose last name begins with the letter R? I'd really like to know.

This book is both sexy and sad, magical and heartbreaking. And parts of it left me breathless.

Forever, Interrupted by Taylor Jenkins Reid is definitely "not your average love story." I've never read another novel where a romance so right and a grief so poignant are as deftly woven together as in this one. Once I picked it up, I could not put it down.

Elsie Porter meets Ben Ross on New Year's Day. Their attraction is instantaneous and very mutual. After only two weeks of dating, they've both fallen head over heels in love with each other. Five months later, they decide to elope. Nine days after that, Ben is hit by a truck and killed on impact. Their love was like a supernova. And then it wasn't. Life's like that. But that's not the end ... because "there's more than one way to find a happy ending."

This gripping, amazing novel made me smile, sigh, laugh, cry, skip ahead and go back and read all over again. It's that kind of book.

"It is not enough to have dreams in your heart.
You have to put your heart in your dreams."
--Lori Carlson, The Sunday Tertulia

"Twenty years from now you will be more disappointed by the things that you didn't do than by the ones you did do. So throw off the bowlines. Sail away from the safe harbor. Catch the trade winds in your sails. Explore. Dream. Discover."
--H. Jackson Brown, Jr.

"Whatever you can do or dream you can, begin it.
Boldness has genius, power and magic in it."
--Goethe

"If one advances confidently in the direction of his dreams, and endeavors to live the life which he has imagined, he will meet with success unexpected in common hours."
--Henry David Thoreau, Walden

Email ThisBlogThis!Share to TwitterShare to FacebookShare to Pinterest
Labels: quotes on dreams

From my TBR shelf...

Author Anthony Berkeley helped usher in the Golden Era of detective fiction. The Poisoned Chocolates Case is his 5th novel. It revolves around the exclusive Crimes Circle Club whose six members have an interest in murder, detection and criminal psychology; as an intellectual exercise, they've decided to solve a recent murder that has Scotland Yard stumped. The club members give themselves one week to study the case and come up with their own solutions, which they'll then present at their next meeting.

The crime they are trying to solve begins with a simple box of chocolates which is delivered anonymously to Sir Eustace Pennefeather at his club, the Rainbow. Not wanting them himself, he passes the chocolates onto Graham Bendix, who then gives them to his wife. Neither knows that the chocolates have been poisoned until Mrs. Bendix dies. It seems the intended target was Sir Eustace, but who would want to murder him? That's what the Crimes Circle intends to figure out.

It's a fun premise for a murder mystery. As each club member presents his or her solution, you as the reader learn a little bit more about the murder, but never enough to solve it completely, especially when the other members quickly refute the others' premises. I thought it was an interesting way to tell a story. And I liked Berkeley's style of writing and his sense of humor, like when he writes that candidates for the Crimes Circle Club "must have a brain and be able to use it" or when he writes that Mrs. Bendix "was not so serious-minded as not to have a healthy feminine interest in good chocolates". Is this the best murder mystery ever written? No. But it is a good one, and I enjoyed reading it. (With a box of chocolates nearby!) And because this book is "Older Than My Mom" it fills another Reading Bingo square which is an added bookish bonus. (Although it could also be in the running for the Ugly Cover square.)

Three of my favorite authors have new books coming out this year and I can't wait! The first one, When Falcons Fall by C.S. Harris comes out on March 1st. This historical mystery series features Sebastian St. Cyr Viscount Devlin, whom I have a bit of a bookish crush on.

Then, on March 8th, Patricia Briggs' latest Mercy Thompson novel, Fire Touched, is being released. This is my favorite urban fantasy series. (Gotta love those werewolves!)

Finally, on April 8th, comes Lost Among the Living by Simone St. James. I absolutely love her novels of ghostly suspense and romance!

See why I have such a bad case of bookish anticipation? Now if only Sharon Bolton would hurry up and write a new Lacey Fling novel life would be complete.