The Winter Witch by Paula Brackston

"Cai gets up, goes to the window, and opens the shutters.  The sight that greets him moves him in so many ways that he is left in absolutely no doubt as to his own regard for his new wife.  Morgana, still in her white, sleeveless nightgown, her feet bare, her hair loose and wild, runs in the meadow, the dogs dancing with her...She runs with the joy of a free spirit, a child of the hills...(And) Cai has never seen anyone so beautiful."

Cai is a young widower and what he doesn't know about his untamed, wordless wife is that she has magic in her blood; that she is, in fact, a witch.  What neither Cai nor Morgana know is that there is another witch in town, one who practices a much blacker magic, and who is determined to destroy their new life together.

This book is set at Ffynnon Las in Wales during the early nineteenth century.  If you're not a fan of historical fiction, don't worry; this story is so well-written I never once got bogged down in the historical details.  And it's impossible not to get caught up in Cai and Morgana's struggles, shy romance, and growing love.  Because at its heart, The Winter Witch is a love story.  Maybe that's why I liked it so much. 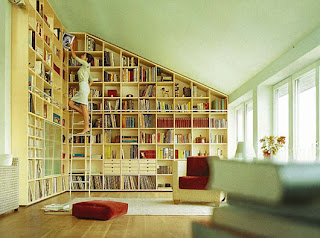 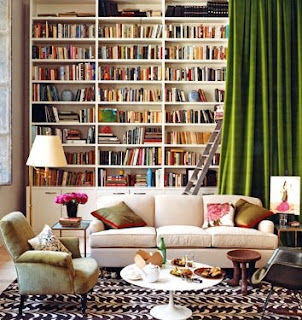 When I saw these two rooms with their lovely, tall, built-in bookshelves, I was filled with sudden longing for a beautiful home library of my own.  I have several book cases in my home, but none as nice as these.


Normally, I am not a jealous person.  I can live without granite countertops, could care less about stainless steel appliances or big screen televisions.  But I have to admit, rooms with built-in bookshelves fill me with envy.  Bookshelf envy.  I mean, just think of all the books that would fit on all those shelves!  I could go book shopping and still have room left to grow.

What girl could ask for more?
Posted by Lark at 1:00 AM 6 comments:

The Quiet Girl by Peter Hoeg

I don't like clowns, but 42-year-old Kaspar Krone is not your average clown.  Among his extraordinary skills is the ability to hear hidden symphonies in a cityscape, sonatas in a beating heart, and the rich undertones and counter melodies of thought and intent in someone's voice.  That makes him the perfect person to find KlaraMaria, a missing girl with special skills of her own.  The only trouble is that everyone in Copenhagen wants to find KlaraMaria, to control her, and Kaspar has no idea who is telling the truth, or who he can trust--added complications in his already complicated life.

Hoeg's novel weaves together Kaspar's past and present with the music of Bach and the wisdom of the great philosophers.  Hoeg does make some jumps in time in this novel which are a bit hard to follow, and it isn't always easy telling the good guys from the bad, but Kaspar is such an engaging character, I willingly followed him through all 408 pages.  He is one of the great clowns, and his performance in this book is not only memorable, but masterful!

A book by any other name...

Should It Stay, Or Should It Go?

I try to only keep the books that I love, or that I want to read again someday.  But sometimes I let books linger on my shelves out of habit...or laziness.  It's hard discarding books.  I live in fear that the book I get rid of today will be the book I'm desperate to read tomorrow.  Which means that I keep a lot of books and that my book shelves are full ... But at least I don't have a growing book hoard creeping across my floor.

I'd like to keep it that way, which means weeding my shelves occasionally.  Never fun, but necessary.  Still, it's not easy choosing which books should stay and which should go.  That's why I try to limit myself to only buying books I love and know I'll want to own forever.  But bookstores are temptresses, and somehow I always come home with more books than I should.

So, what's your criteria for keeping or getting rid of a book?  How do you choose which ones should stay ... and which should go?
Posted by Lark at 5:00 AM 4 comments:

Email ThisBlogThis!Share to TwitterShare to FacebookShare to Pinterest
Labels: discarding books, keeping books, too many books

The Fate of Mercy Alban by Wendy Webb

I like a bit of Gothic in my fiction now and then, maybe that's why I like The Fate of Mercy Alban by Wendy Webb.  Not only does this novel have a haunted house with hidden passageways and lurking ghosts, but there's also some strange deaths, a tragic love story, a hushed-up family curse, and a lost manuscript that may or may not exist.  What more could you ask for?

In the wake of her mother's death, Grace Alban discovers some old love letters that lead her to question her family's past.  As she searches for the truth, the web of secrets and lies surrounding Alban House begins to unravel.  Strange things start to happen in the house.  Even more threatening, Grace feels she is being watched...not by the ghosts from her past, but by something much more malevolent.

If you're looking for a fun Gothic thriller, check out The Fate of Mercy Alban.  The ending, especially, will keep you reading late into the night.  Wendy Webb's first novel, The Tale of Halcyon Crane, is also worth checking out.
Posted by Lark at 5:00 AM 6 comments:

"The boy's skin was as cold and gray as the cement on which he lay.  I could find neither his heartbeat nor his pulse.  His eyes were wild, wide and sunken back in their sockets.  They remained locked on my like a predatory beast."

At first, I wasn't sure I was going to like this book because it's written as a series of interviews rather than a regular fictional story, but I quickly got caught up in each of the personal narratives.  It starts with the first outbreak in China and continues on with the rapid spread of "a new viral outbreak that first eliminated its victim, then reanimated his corpse into some kind of homicidal berzerker."  Each firsthand account gives you another piece of the larger puzzle:  the spreading contagion, the failed attempts to contain it, the growing panic, the military strikes, the stories of those who survived and those who died, the successes and failures, and what's left of the world at the end of the Zombie War.

World War Z is a uniquely-told and compelling read.  I don't know why it took me so long to get around to reading it, but I'm glad I finally did.  The movie version of World War Z comes out this June.  And while I can't quite picture how they're going to turn this book into a movie, I can't wait to see how they do it.
Posted by Lark at 5:00 AM 6 comments:


"And now I will unclasp a secret book,
And to your quick-conceiving discontents
I'll read you matter deep and dangerous..."
-Wm. Shakespeare

The Book of Tomorrow by Cecelia Ahern

Like a topple of dominoes, Tamara Goodwin's happy life has crashed to the ground.  Her father committed suicide, leaving behind a mountain of debt.  Her mother now seems lost in a fog of grief.  The bank repossesses their house.  With no money, Tamara and her mother are forced to leave Dublin and move in with Tamara's strange Uncle Arthur and even stranger Aunt Rosaleen.

Stuck out in the middle of nowhere with no car and no friends, there's not much for Tamara to do.  But then she meets Sister Ignatius, keeper of bees and secrets; Weseley, the cute boy-next-door type; and Marcus, the charming driver of the local bookmobile.  It's in this "Travelling Library" that Tamara finds an old leather bound diary.  And it doesn't take her long to realize that this diary is special ... maybe even magic.

"That night I sat staring at the diary for hours.  I kept it open on my lap, waiting for the words to arrive ... when I woke up at one A.M., the diary was still open on my lap, every single line filled in my handwriting.  Gone was yesterday's forecast and in its place was another entry, a different entry for tomorrow."

With the help of the diary Tamara can now change her future, but should she?

I've never read Cecelia Ahern before but I'm really glad I stumbled across this book at the library.  Her plot is tightly woven and character-driven.  Tamara's grief and anger at her father's death is completely believable, as is her curiosity in the face of her aunt's strange (and increasingly creepy) behavior.  I will definitely be reading Cecelia Ahern again!
Posted by Lark at 5:00 AM 3 comments:

"I have always been a reader; I have read at every stage of my life,
and there has never been a time when reading was not my greatest joy.  And yet I cannot pretend that the reading I have done in my adult years matches in its impact on my soul the reading I did as a child.  I still believe in stories.  I still forget myself when I am in the middle of a good book.  Yet it is not the same.  Books are, for me ... the most important thing; what I cannot forget is that there was a time when they were at once more banal and more essential than that.  When I was a child, books were everything." --Diane Setterfield, The Thirteenth Tale 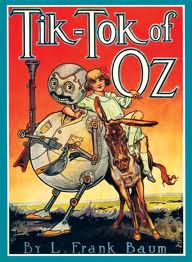 On Children's Book Day, take a moment to remember the books you loved as a child.  Revisit the magic and wonder of Oz.  Return to the world of Nancy Drew where mystery and adventure ruled.  Reread Harry Potter and the Sorcerer's Stone or The Lion, the Witch, and the Wardrobe.  Pick up any children's book that once made you smile and remember how it felt to read your favorite book from childhood for the very first time.  Which childhood book will you choose? 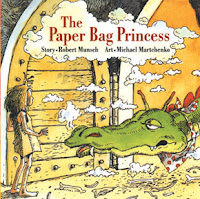