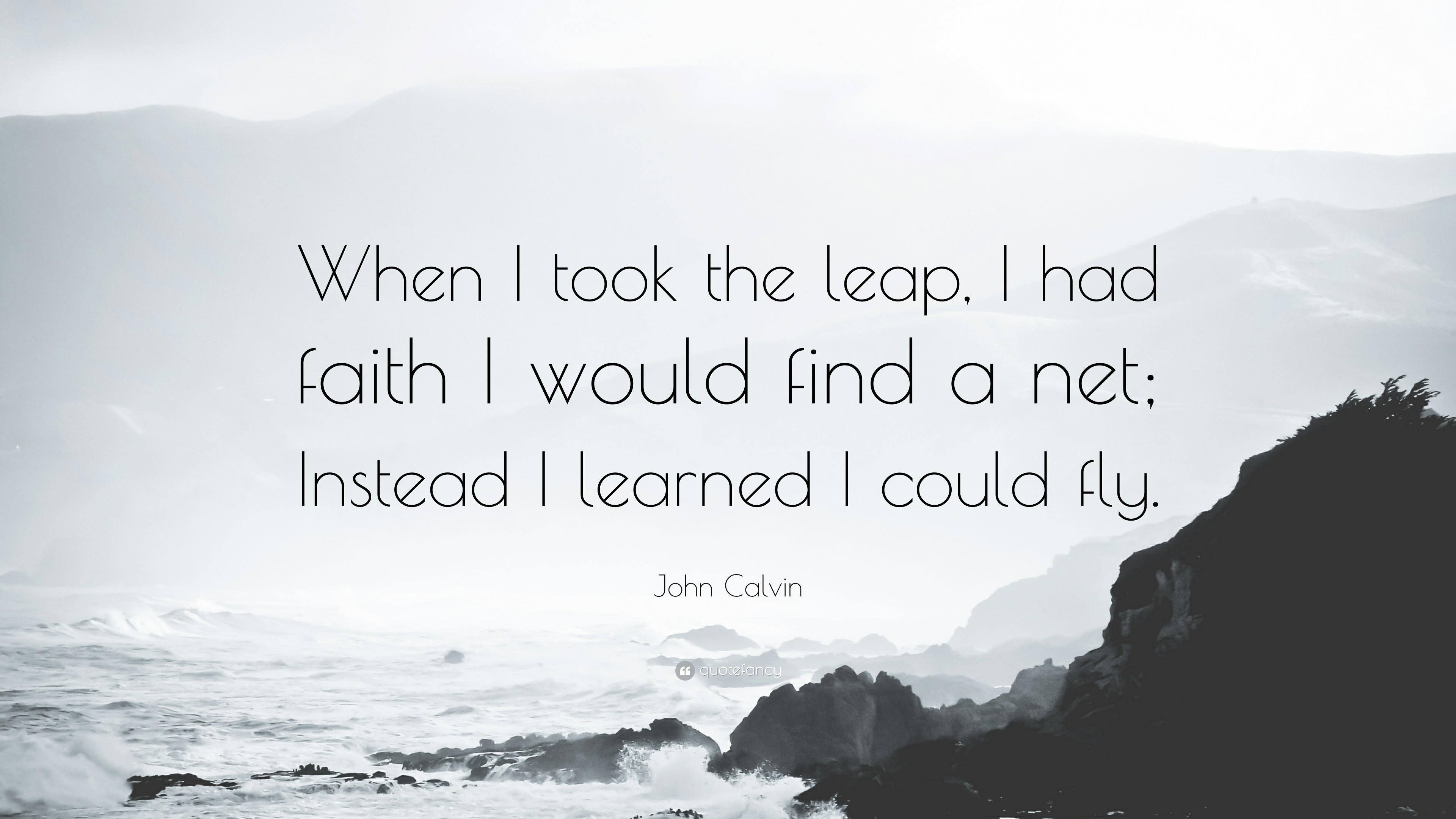 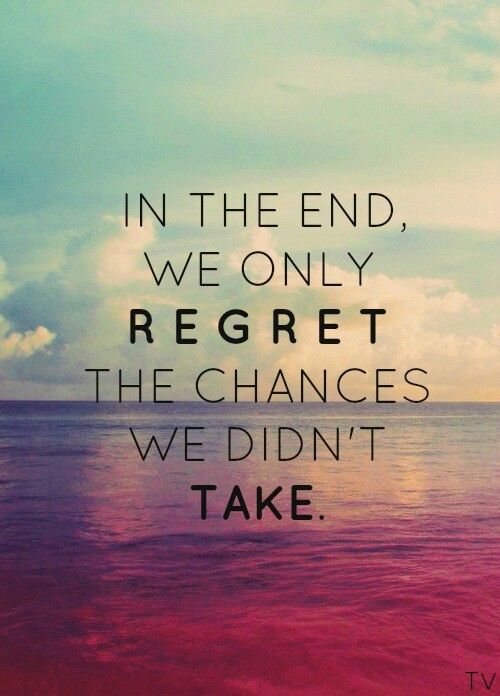 When We Were Lost by Kevin Wignall

"They had been in a plane crash. Their plane had crashed, torn itself apart, and they had survived .... For now."

"There would be no rescue party, he was certain of that now. He'd already sensed they might have a long wait, but unless someone had actually see or heard their plane cutting through the early morning dark, they might as well have vanished off the face of the earth. Right now, they would have become a mystery, filling news bulletins all over the world. But this was the reality of that mystery--most of them were dead, and the survivors would have no choice but to find their own way out of this vast and undoubtedly hostile jungle."

My thoughts:  You know I love disaster/survival novels and When We Were Lost by Kevin Wignall is a good one. It centers around a bunch of teenagers from the same high school who aren't exactly friends... until their plane crashes in a remote jungle and they are forced to band together in order to survive. Tom is the outsider. He's not okay with blindly following orders from anyone else because he has his own ideas on how to survive. I liked him a lot. He's quiet, self-effacing and definitely not interested in being designated the leader of their group. But others keep looking to him for what they should do next...and he really doesn't want anyone else to die because of his own inaction. So in a way, besides being a story of survival, this is also a coming of age story.

The jungle itself has many hazards: snakes and other predators, rough terrain, sweltering heat and a lack of clean water, as well as other hidden dangers. But the greatest threat of all may be from the other people in their group. This YA novel is well-written, has great pacing, and I thought the teens themselves were well-drawn and believable. I liked Barney, the smart nerdy kid, and Alice and Kate, two fiercely independent girls who aren't afraid to speak their minds. Then there's George. And Shen. So many characters to like. Parts of the story did feel a little predictable, and I could have totally done without the prologue and epilogue (I didn't think either added to the story). But overall, I'd give this one 4 stars.

So many bookish tees out there to choose from... 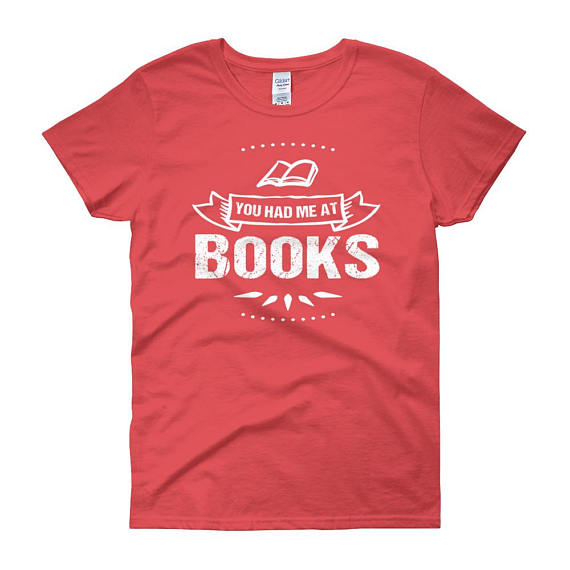 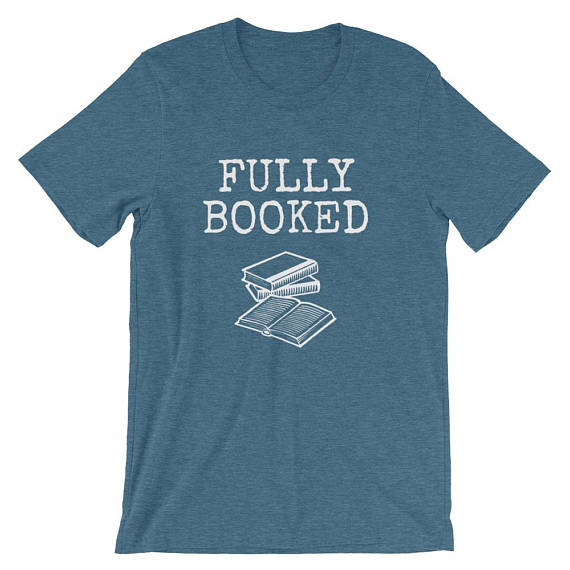 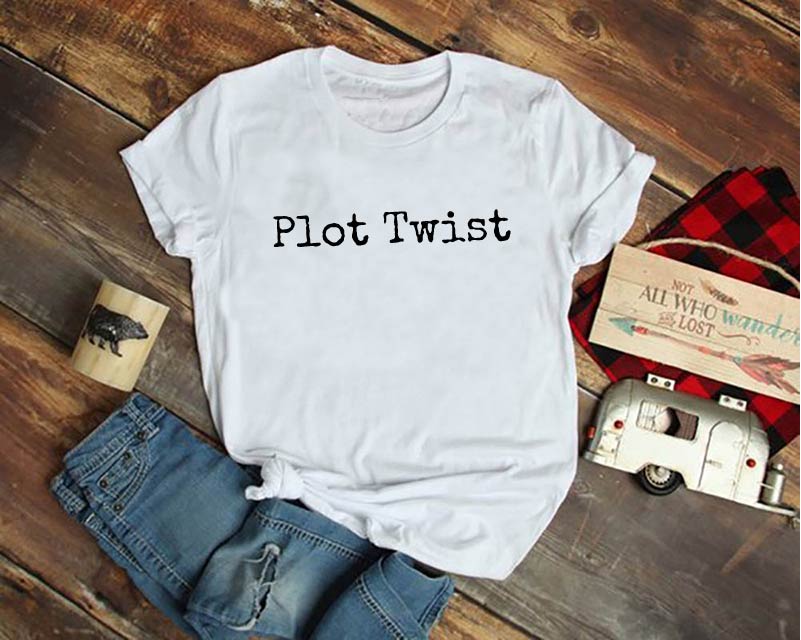 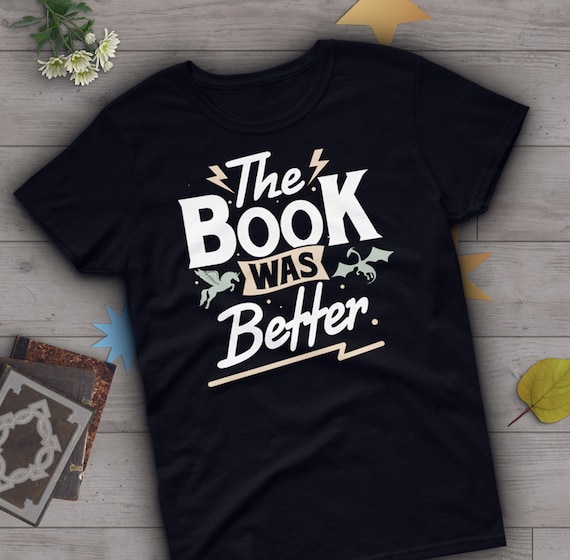 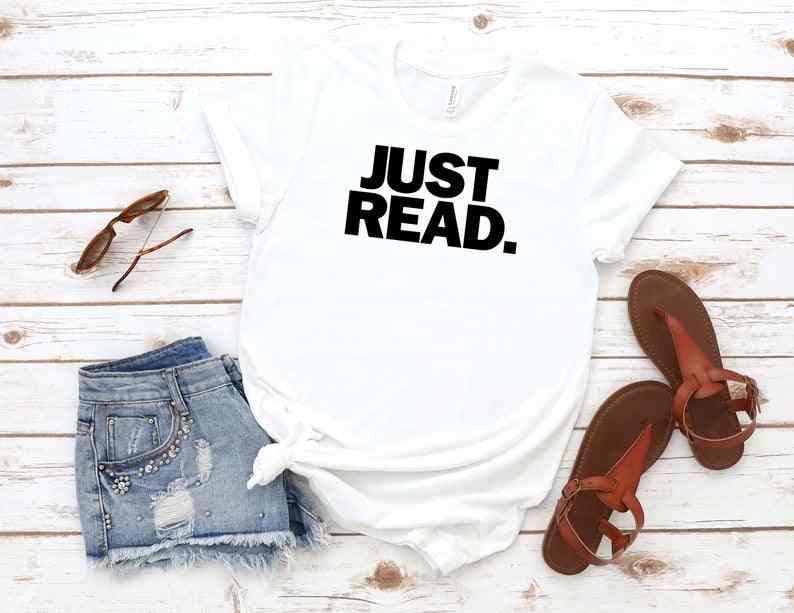 ...I can't decide which one I like best.
What about you? Do you have a favorite?

"In the back woods of the Adirondacks, Dr. Logan,
there's history--and then there's mystery." 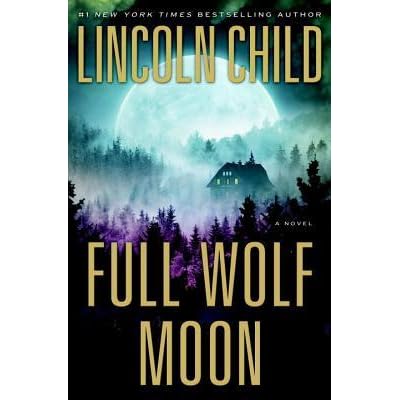 Both victims were backpackers.
Both were in the vicinity of Desolation Mountain.
Both were killed during full moons.
The park rangers may blame their deaths on bear attacks,
but the locals know better.
They blame the Blakeney Clan.

Dr. Jeremy Logan, a history professor and enigmalogist, comes to Cloudwater, an artist's retreat in the Adirondack Mountains, to finish his monograph on heresy in the Middle Ages. But when Randall Jessup, an old friend from Yale and a ranger in New York's Division of Forest Protection, asks for his help solving two suspicious and savage maulings, he can't help getting involved. Because investigating the strange and inexplicable is what he does. Only this time, what he finds is almost too strange to believe.

Lincoln Child always writes a fun supernatural mystery. Even though this one wasn't nearly as fast-paced or as suspenseful as I expected, I still liked it. Apparently Child has written several books about enigmalogist Jeremy Logan, but this is the first one I've read. I'll definitely be reading more though. Logan is a great character, equally open-minded and skeptical when it comes to proving--or disproving--the supernatural and the occult. I liked him. And the mystery in this one is pretty good. The middle was kind of slow, but the ending made up for it. For me, this is a 3.5/5 star read.

99 Percent Mine by Sally Thorne

Things you need to know about Darcy Barrett:

Even though Darcy sounds like a great character, she ran hot and cold for me. I went from not liking her, to feeling some sympathy for her, to liking her for a page or two, only to end up getting really frustrated with her and wishing she would just grow up! I just did not connect with her at all. It didn't help that this novel is narrated in first person present tense, my least favorite POV.

I liked Tom better. He felt like a more believable and authentic character to me. But I didn't love the way he and Darcy interacted. Some of their banter was humorous and they shared some cute moments of genuine friendship that I liked, but there were more moments where I found myself shaking my head in frustration at their stubbornness and snarkiness towards each other, and their inability to just be open and honest with each other. I wanted to slap some sense into them multiple times, especially Darcy. In fact, there were moments when I wondered why Tom even liked her. But then, he wasn't perfect in this relationship either.

In the end, I didn't love this one. But even though this particular romance didn't work for me, I did have a lot of fun reading it with Melody. Be sure to check out her review to see what she thinks of this one. Then check out her questions to me below.

Q. What are your likes and dislikes (if any) of this book?
A. I liked all of Darcy's references to her grandmother, Loretta. That's  one character I really wish I could have gotten to know better! I disliked how competitive Darcy and Jamie could get with one another. And while I really liked Tom as a person, I disliked how he acted around Darcy-- how he'd become all secretive, and even lie, just to "protect" her. I didn't like those moments at all.

Q. What do you think of friends-to-lovers relationships?
A. In general, that friends-to-lovers trope is one of my favorites. When two characters have a genuine friendship and then proceed to fall in love...it's the best. 😊
Posted by Lark at 3:00 AM 24 comments:

I've done a few love-themed posts in the past:  Favorite Stories of Love and Romance and Favorite Bookish Couples. So I wasn't sure what I wanted to do this time around. But then, as I was sorting through my bookshelves trying to make room for some new books, I realized I own a lot of nonfiction books that I REALLY love. They're books that made a big impression on me the first time I read them; unforgettable reads that took me from Paris to the Amazon to the deepest of caves, back in time to important moments in history, across a desert, and around the world. The only problem? Trying to narrow my list down to just ten. (I failed!) So, without further ado, here they are, 13 Amazing Nonfiction Reads that I Absolutely Adore:

1. The Lost City of Z
by David Grann

2. Beyond the Deep
by William Stone and Barbara am Ende

6. Between Silk and Cyanide
by Leo Marks

7. The Piano Shop on the Left Bank
by Thad Carhart

8. The Professor and the Madman
by Simon Winchester

10. The Lost: A Search for Six of Six Million
by Daniel Mendelsohn

11. In the Spirit of Crazy Horse
by Peter Matthiessen

12. Lost in the Amazon
by Stephen Kirkpatrick

13. In a Gilded Cage
by Marian Fowler

Touching the Void by Joe Simpson

"I was breathing heavily as I dug through the soft surface snow to find the firm ice below. I drove in two ice screws and planted both axes above my stance before tying into them and shouting for Simon to come up. We were close to the serac barrier...I felt confident and at ease. We were a match for this route and I now knew that we would finish it. I felt a thrill at the knowledge that I was, at last, on the verge of achieving a first ascent, and a hard one at that."

In May 1985, Joe Simpson and his climbing partner, Simon Yates, ascended the West Face of Siula Grande, a 21,000-foot peak in the Peruvian Andes. They navigated glaciers and ice fields, slept in snow holes, and struggled to avoid the deep crevasses hidden by snow. On their fourth day of climbing they reached the summit. But it was on their descent that things started to go wrong. Joe falls badly, breaking his right leg. Simon must then lower him by rope down the mountain, 300 feet at a time, a grueling and torturous task for both men. Then, when they've almost made it to the glacier below, Joe drops off an ice cliff. Dangling in mid-air 150-feet below Simon, he can't climb up or down. It's getting dark. A blizzard is kicking up. And, with no strength left in his frostbitten hands to pull Joe back up, Simon is forced to cut the rope tying them together. Joe falls into the yawning crevasse below. Simon is sure he is dead. But somehow, Joe survives. Even more amazing, he manages to find his way out of that crevasse, and then crawl and hop back down the mountain all alone to their camp.


"I was mesmerized by this beam of sunlight burning through the vaulted ceiling from the real world outside. It had me so fixated that I forgot about the uncertain floor below and let myself slide down the rest of the rope. I was going to reach that sunbeam. I knew it then with absolute certainty. ... In seconds my whole outlook changed. The weary frightened hours of night were forgotten, and the abseil which had filled me with such claustrophobic dread had been swept away. ... I could do something positive. I could crawl, and climb, and keep on doing so until I had escaped from this grave."

Simpson's inner resolve and what he had to do to get back down the mountain is a remarkable story of sheer grit and determination. I can't believe he lived to tell the tale. And what a story it is! It confirmed for me what I already knew:  I will NEVER attempt to climb some far off icy mountain peak. But I will continue to read about those who do from the comfort of my own couch.

Similar read:  The Ledge by Jim Davidson
(This is another mountain adventure I loved.)

Wanted by the Empire.
Kidnapped by Traders. The Admiral
(and his date!) are in trouble.

Space Adventure/Science Fiction .... 306 pages .... 4.5 stars.
(Excellent sequel to The Admiral... except for that cliffhanger ending. What's worse? My library doesn't own the next book!)

Diamond in the Rough by Jen Turano

For her first New York Season,
Poppy's grandmother hires a duke's son to tutor
her in all the social graces.
(Trouble, and love, ensue.)

The Dinosaur Four by Geoff Jones

An experiment goes wrong
sending nine strangers back in time:
Death by dinosaur!

Have you heard these guys?

The Hu is a Mongolian band that combines traditional Mongolian instruments and throat singing with a hard rock sound. I'm a little obsessed with them. (Thanks, Will!)
This is their song Yuve Yuve Yu.
Give it a listen and see what you think.
(P.S. The actual song starts about 1 minute in.)