In Morocco by Edith Wharton

"To step on board a steamer in a Spanish port, and three hours later to land in a country without a guide-book, is a sensation to rouse the hunger of the repletest sight-seer." 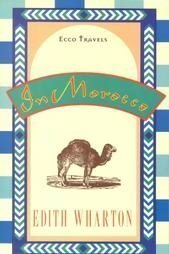 In September 1917, Edith Wharton traveled to Morocco. She spent a month there, making her way from Fez to Marrakech in a French military motorcar. She described the cities, detailed the architecture, reported on the ceremonies she viewed, and even included a brief sketch of Morocco's history. It's obvious she did her homework before embarking on this trip; she knew the names of key historical figures, the dates, and the important events in their lives.

"To see Morocco during the war was therefore to see it in the last phase of its curiously abrupt transition from remoteness and danger to security and accessibility; at a moment when its aspect and its customs were still almost unaffected by European influences, and when the 'Christian' might taste the transient joy of wandering unmolested in cities of ancient mystery and hostility."

This is not an exciting or fast read. Though Wharton chronicles her trip by describing each city and place she visited with exacting detail, she's barely in the book herself. You get no sense of her, or of the people she travelled with, or met. The most exciting thing that happens is a sudden dust storm in Marrakech. Their visit to the Sultan's harem was interesting, too. But mostly this book left me wishing she'd written a fictionalized account of her trip to Morocco instead. That's a book I would love to read! Sadly, I did not love this travelogue.
Wharton's fine writing does shine through in places however, like in these gems:

"If one loses one's way in Morocco, civilization vanishes as though it were a magic carpet rolled up by a Djinn."

"How can it seem other than a dream? Who can have conceived, in the heart of a savage Saharan camp, the serenity of this hidden place?"

I've owned this book for well over a decade, and now that I've read it, I'm glad I can finally take it off my TBR shelf where it's been gathering dust. I also get to count it as my Travel or Adventure Classic for Karen's Back to the Classics Challenge. So that's good, too.