"I have an idea that some men are born out of their due place.  Accident has cast them amid strangers in their birthplace, and the leafy lanes they have known from childhood remain but a place of passage.  They may spend their whole lives aliens among their kindred and remain aloof among the only scenes they have ever known.  Perhaps it is this sense of strangeness that sends men far and wide in the search for something permanent, to which they may attach themselves ... Sometimes a man hits upon a place to which he mysteriously feels that he belongs.  Here is the home he sought, and he will settle amid scenes that he has never seen before, among men he has never known, as though they were familiar to him from his birth.  Here at last he finds rest."  --W. Somerset Maugham,  The Moon and Sixpence

This is the quote that made me pick up my first Maugham novel.  He used Paul Gauguin's life as inspiration for The Moon and Sixpence.  This novel is a great look at the passion and genius of an artist and I liked it so much I went on to read the rest of Maugham's books. 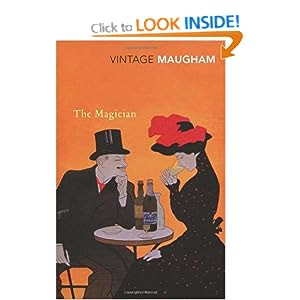 Up at the Villa reads the fastest.  Rosie, from Cakes and Ale, is one of his most memorable characters.  Liza of Lambeth's story is the saddest, and the story of Mrs. Craddock is quiet and bittersweet.  Of Human Bondage is his most serious and literary, but I admit, it's not my favorite.  I prefer Maugham's shorter novels. In fact, The Magician, with the naive and beautiful Margaret Dauncey, the sinister Oliver Haddo, and intrepid Susie Boyd, just might be my favorite of all his novels. It's the one I chose to reread this summer ... and I liked it as much the second time around as I did the first.  If you haven't yet read W. Somerset Maugham, give one of his novels a try.  He just might surprise you.