"Someone was watching.
"...and with that certain knowledge came a knocking in his chest as if his heart had suddenly moved up a gear. Here he was, in the city where five boys his age had disappeared in as many weeks, on his own in the exact part of London where they had all lived, and someone he couldn't see was watching him." 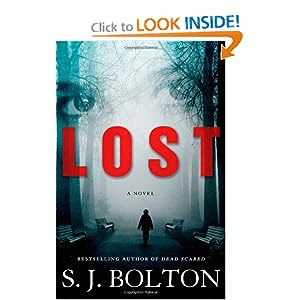 Five boys have been murdered, their bodies drained of blood, and the police have no suspects.  Still recovering from her previous case, D.I. Lacey Flint is not only avoiding fellow detective, Mark Joesbury, she's determined to avoid this latest investigation, too. Not so for her eleven-year-old neighbor, Barney Roberts; he and his friends are convinced they can solve the case before the police. Too bad Barney never considers that he just might be the killer's next victim. Or that the killer might be someone he knows. His involvement in the case ends up involving Lacey Flint...whether she's ready to return to work or not.

S.J. Bolton has written another compelling psychological thriller--one of those books that keeps you guessing. And when you do reach the end and discover the truth, it only makes you want to reread the entire book from the beginning. Bolton is an amazing writer. I love the way she creates tension in her novels, and her characters live and breathe on the page, making them unforgettable. Especially Lacey Flint and Mark Joesbury! If you haven't read their previous books, Now You See Me and Dead Scared, definitely read them first. You won't be sorry!