I have been a fan of Henry David Thoreau and his writing for a long time.  Walden is one of those books I pull out and dip into often.  So, to honor Thoreau on his 196th birthday, I picked a few of my favorite Thoreau quotes to post here.  (Although it was hard to limit myself to three!)


"In the long run, men hit only what they aim at.  Therefore, though they should fail immediately, they had better aim at something high." 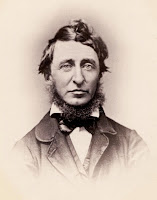 "If one advances confidently in the direction of his dreams, and endeavors to live the life which he has imagined, he will meet with a success unexpected in common hours.  If you have built castles in the air, your work need not be lost; that is where they should be.  Now put the foundations under them."


"If a man does not keep pace with his companions, perhaps it is because he hears a different drummer.  Let him step to the music which he hears, however measured or far away."