Escape From Camp 14 by Blaine Harden 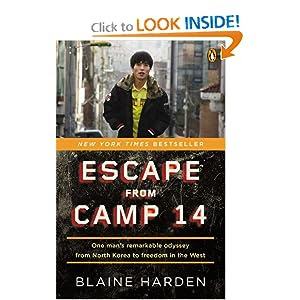 I've been in a non-fiction mood lately, so when I saw this book on a display shelf at the library I happily checked it out. It is the true story of a North Korean boy named Shin who was born and raised in Camp 14, a harsh and unforgiving political prison camp in the heart of North Korea. (The government of North Korea continues to deny the existence of Camp 14, and other prison camps like it, to this very day.)

Shin is raised without love or compassion. His first memory is of an execution. There is no one in the camp that he can trust; to snitch on other prisoners is to live. He grows up chronically malnourished. The punishments he receives are terrible. When he is 14, his mother and older brother are arrested and executed for attempting to escape. Shin and his father are punished for their mistake.

Then, on January 2, 2005, Shin escapes Camp 14--the only person alive to do so. His escape is not driven by thoughts of freedom, or fear of punishment, but the dream of "one day getting out of the camp and eating whatever he wanted. Freedom, in Shin's mind, was just another word for grilled meat...He ached for a world where an insignificant person like himself could walk into a restaurant and fill his stomach with rice and meat."

Shin survives and finds a new life for himself in South Korea and America, but thousands of North Koreans just like Shin remain imprisoned in inhumane camps across North Korea. And that's the most heartbreaking part of this story--that these atrocities are still going on today and the rest of the world does nothing to stop it. This is a moving and powerful story, one I won't soon forget.

Similar Reads:
Prisoner B-3087 by Alan Gratz
In the Sea There Are Crocodiles by Fabio Geda