Of Books and Birds...

According to Mark Obmascik's The Big Year, there are 675 bird species common to North America. (Not counting vagrants or varities--those birds that get lost in migration and show up in places they don't belong.)

In 1998, Sandy Komito found and identified 745 species of birds, setting a new North American birding record that will never be broken. Talk about a big year! His two closest competitors, Greg Miller and Al Levantin, counted 715 and 711 birds respectively. The Big Year chronicles this amazing accomplishment. (Or you can watch the hilarious and heartwarming movie version starring Steve Martin, Jack Black, and Owen Wilson. I love this movie! It's what got me into birdwatching in the first place.) 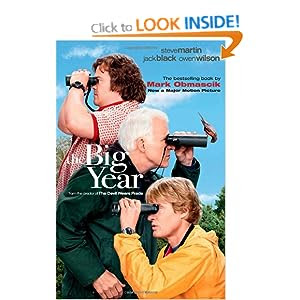 While I'll never attempt a "Big Year" myself, I do have my own life list: 99 birds that I have seen and identified so far. (I'm hoping to hit 100 by the end of the year.) My favorite bird? Hmm. It's hard to choose. I love the Canyon Wrens I spotted last year on my birthday (talk about a great present!); and I'm especially fond of the small but charming Black-Capped Chickadees that swoop to my feeder every morning, steal a seed or two, and swoop away again to go eat them in a tree. Then there are American Avocets, Black-necked Stilts, and Snowy Egrets; Great Blue Herons, Bald Eagles, and Belted Kingfishers. And what about Hummingbirds, Warblers, and Kestrels? Sigh. I can't choose. The truth is, I haven't yet seen a bird I didn't love. And that's what makes birdwatching so great!