Ada, a princess from House von Hasenberg, has been on the run for two years when she's snagged by mercenaries. They mean to return her to her family and claim their reward. But then Richard from House Rockhurst, the man she was supposed to marry, turns up to claim her for his own. She's in serious trouble this time. But she's not the only captive on board ship with a price on her head. Marcus Loch, the notorious Devil of Fornax Zero, is also a prisoner. If they team up, they just might be able to escape. But can she trust him not to double-cross her the moment he regains his own freedom? And how is she ever going to get Richard Rockhurst off her trail without starting a war between both their houses? 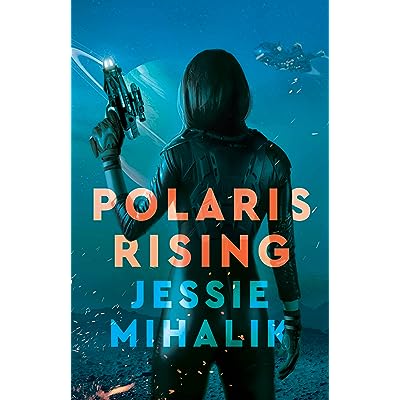 The engine steadied and the window shutters retracted, leaving a clear view of the vast emptiness of space. And for the first time, the magnitude of what I'd done hit me. I was alone on a tiny lifeboat, in the middle of nowhere, with a man twice my size. And he was a known murderer. Without the adrenaline driving me, fear crept in.

Polaris Rising by Jessie Mihalik is non-stop space adventure fun. I stayed up half the night reading this book because I didn't want to put it down. Ada and Marcus are irresistible characters--both smart, stubborn and tough; they're also complete opposites...and completely perfect for each other. I loved them both. There's also some great futuristic tech--healing nanobots, shield bracelets, FTL drives, etc.--but the story never bogs down in the science. It's all fast-paced, compelling, entertaining action (with some sex and romance, too). Can you tell I really liked this one?