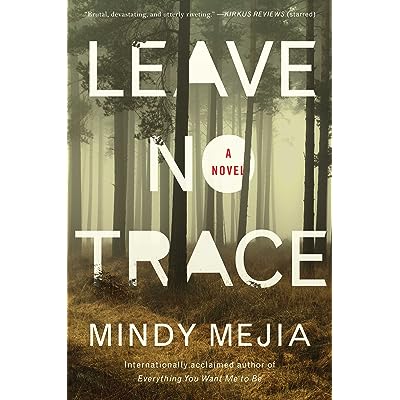 Opening sentence:  By the time the boy in ward four attacked me, I'd already nicknamed him the Lost One in my head.

My thoughts:  Leave No Trace by Mindy Mejia is a compelling psychological thriller about the choices we make and the secrets we keep. And there are secrets! Maya quickly becomes obsessed with finding out what happened to Lucas, while Lucas only wants to get back to the wilderness and his father. Both are haunted by their pasts. I thought it was interesting how their stories intersected. I ended up really liking this one. Mejia combines good writing with engaging characters. Lucas and Maya are easy to root for, and the novel really picks up suspense and speed toward the end. All in all, Leave No Trace is an entertaining, page-turning ride.

Jenclair at A Garden Carried in the Pocket and Rachel at Waves of Fiction have already reviewed this book better than I ever could. So go read their reviews and you'll understand why A Merciful Death by Kendra Elliot is a mystery worth reading! FBI Agent Mercy Kilpatrick is a great character; and I loved all the prepper stuff. Talk about a 5-star read. I can't wait to check out the next book in this series.
Posted by Lark at 5:00 AM