Gumiho -- n. an immortal nine-tailed female fox who can take the shape of a human woman, and who survives by consuming the gi, or energy, of men. 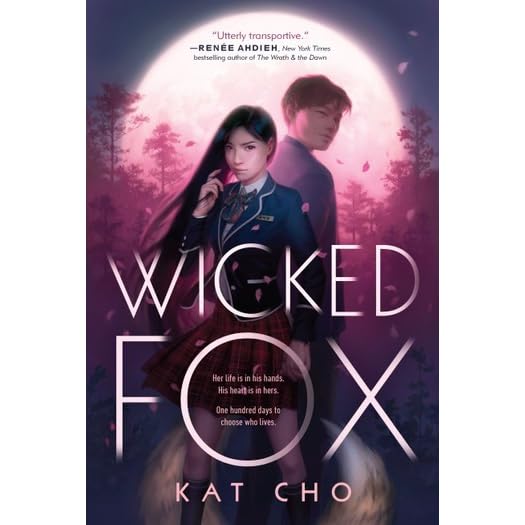 Miyoung is eighteen and half-gumiho, half-human; in order to live she takes the energy of human men every full moon, killing them at the same time. But she's not a monster. With the help of Nara, a young shaman who sees ghosts, she chooses men who aren't innocent, but who are guilty of their own terrible crimes. It's not ideal, but she doesn't want to die.


"If I stop absorbing gi for a hundred days, I'll die. I trade human energy for my life and for immortality."

Jihoon, on the other hand, is a typical Korean teenager. He prefers video games to school and usually manages to charm his way out of trouble with his boyish grin. He stumbles upon Miyoung one night in the woods just after she's fed. She ends up saving him from a dokkaebi, a powerful goblin, losing her fox bead in the process (that's the bead that holds her gumiho soul). It's a problem. Jihoon now knows her secret, and that puts both of them in danger because the gumiho have many enemies. But even though Miyoung tells Jihoon to leave her alone, he persists in trying to be her friend. Because he can't seem to forget her.


"It had been a long week of thinking of Miyoung. Of worrying about her. Of remembering that night in the rain. That night ... he'd been tempted to kiss her. He'd wanted to see if she'd taste like rain. He suspected it was more likely she'd taste like lightning."

Melody suggested we read this book for our next buddy read and I'm so glad she did! I loved the fantasy part of it that revolves around the Korean folklore of the gumiho, and the dokkaebi, and the shamans and their power; and I loved the 'teen-ness' of Jihoon's friendship and growing feelings for Miyoung, and her guardedness against getting involved with him...or any human. Jihoon's loving relationship with his aging grandmother was another favorite part. Miyoung's mother, Yena, on the other hand, kind of scared me. The modern-day Seoul backdrop, with its distinctive culture, added really nice flavor to the entire story. This fun YA novel has humor and magic and suspense, along with death and loss, forgiveness and love.

I also thought it was really well-written, though there were times when the dialogue felt a little stilted and not quite realistic. And I could have done without the epilogue. But overall, I really liked this one. The chapters are short, so it reads fast. The characters are great. And there's even an unexpected twist or two at the end. Be sure to check out Melody's review of this entertaining novel!

Here are Melody's questions for me...and my answers:

Q. Prior to reading this book, have you heard of this Korean mythology featuring the mystical nine-tailed fox? In this story, what do you think of Miyoung preying on men who did evil deeds?
A. I'm not very familiar with Korean mythology and wasn't familiar with the gumiho at all. But after reading this book, I'd like to read more about these Korean myths and legends. And while I've never been a fan of characters meting out their own justice on people, I sympathized with Miyoung's desire to not be a monster while she's forced to kill in order to stay alive herself. The fact that she tries to only steal the life energy of evil men made me like her a little more.

Q. Love and trust seem to be the core factor surrounding this story. Which scenario touched you the most?
A. Jihoon doesn't really know his father, and his mother left him with his grandmother when he was four, so it was his relationship with his grandmother that touched me the most. Especially what she was willing to sacrifice in order to save his life. That kind of love always makes me cry.